Dental braces (also known as orthodontic braces, or simply braces) are a device used in orthodontics to align teeth and their position with regard to a person’s bite. They are often used to correct malocclusions such as underbites, overbites, cross bites and open bites, or crooked teeth and various other flaws of teeth and jaws, whether cosmetic or structural. Orthodontic braces are often used in conjunction with other orthodontic appliances to widen the palate or jaws or otherwise shape the teeth and jaws. While they are mainly used on children and teenagers, adults can also use them. 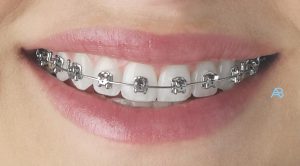 Types and Varieties of braces: